Corbel in the Curl Chapel

The South Transept known as various times as the Curl or Minchin chapel, and formerly the Lady Chapel is of late 13th century.  In the central recess on the east wall has a flat sill, below which is a narrow recess with splayed sides, in which is a shaft carrying a large carved corbel in the form of three human heads amongst foliage beneath a moulded shelf.  The top of the shelf is level with the floor of the upper recess and has pinholes in its upper side.  The carving of the corbel is good.  The 3 stone heads were discovered in 1880 after removal of some bricks and plaster by Mrs M. Morley, the Vicar’s wife.

Late 13th century carving of three heads which would almost certainly have supported a statue of the Virgin Mary. The outer two figures clearly have beards. 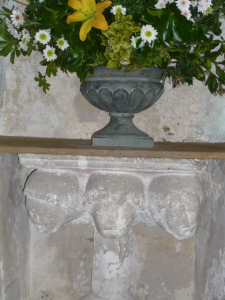 The Chancel dates from the 14th century and one piece of Medieval glass remains in the small window nest to the Squint. It is dedicated to the arms of Cardinal Beaufort, Bishop of Winchester who died in 1447. It is to be found just on the chancel side of the squint, close to the lectern. 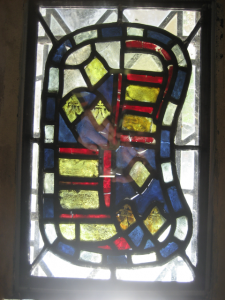